At approximately 8pm on Thursday, April 16, 2015, Officer Jesse Kidder of the New Richmond, Ohio, police department was alerted by his dispatch center of a homicide suspect who had fled in a vehicle from investigators moments earlier in an adjacent county. Officer Kidder, who grew up in the area and knew the roads thoroughly, set up in a strategic location where he believed the suspect might pass by. Moments later it happened. 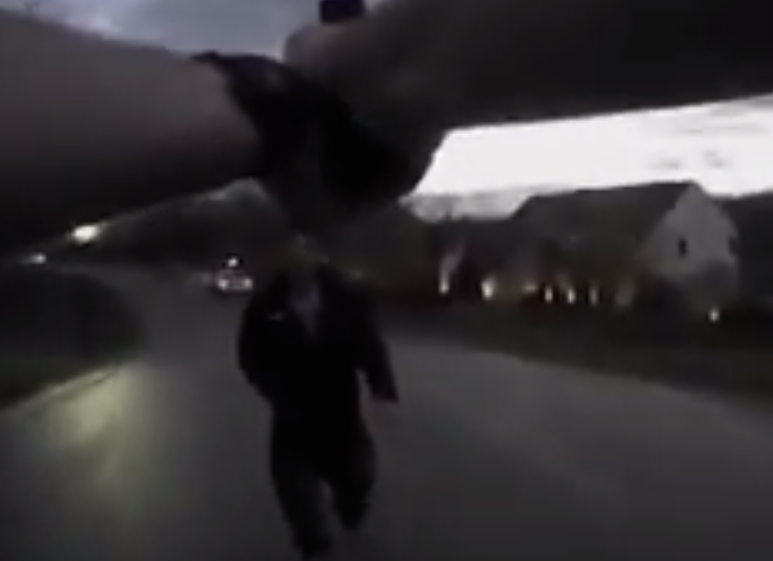 Watch the video, captured on a bodycam provided to Officer Kidder in the events following Ferguson, Mo., unrest.

Using sound tactics, Kidder followed the suspect for nearly 10 minutes while waiting for back-up. Dispatchers advised that the suspect, 27-year-old Michael Wilcox, may threaten “suicide by cop” and could be in possession of a firearm. Suddenly the suspect stopped his car and exited quickly.

The events following Ferguson, Mo., prompted Kidder’s family to purchase a bodycam for the officer, because his department didn’t issue them, in hopes that it could keep Kidder safe.

The video that this bodycam captured makes obvious that Wilcox aggressively charged towards Officer Kidder. There is little doubt that the suspect was trying to get Kidder to use deadly force. At times the suspect concealed his hands, consistent with an armed individual, and even shouted at Kidder, “SHOOT ME!”

While retreating, approximately 10 seconds into the encounter, Kidder told the suspect to “Get your hands up!” Wilcox then stopped and appeared to retrieve something from the ground. He again charged Officer Kidder, who continued backing up as he shouted, “I DON’T WANT TO SHOOT YOU!”

Nearly 40 seconds into the encounter Kidder made an urgent plea on his radio for incoming units to “STEP IT UP NOW!” While doing so, Kidder lost his balance and fell backwards to the ground. Fortunately, the suspect stopped his advance and Kidder quickly regained his feet and continued giving commands while keeping his weapon trained on Wilcox.

When sirens can be heard and back up arrives, Wilcox decides to stop his advance and comply with Kidder. He is then taken into custody.

There will also be a segment of the population who will appreciate the way that Kidder responded and who say things like: “That’s how all cops should do it!”

As we have seen with the other videos released over the last six months, there will be no shortage of opinions, praise, and criticisms by people who were not there and didn’t experience what Kidder experienced.

And it’s a total experience, not simply the viewing of a scenario captured by a single camera. Body cams are too often thought to be the panacea, but as we now know, what is seen is judged through the paradigms of biases and beliefs.

In this case the camera clearly caught one of two things:

Either way all opinions are based on individual bias. No one viewing the video actually experienced the reality.

What Actually Happened
Let’s examine. The video clearly shows the suspect charging the officer, his hands concealed, and very likely armed. Or does it?

These feelings and perceptions are one of many obstacles we face when relying on bodycams and dashcams to depict an entire incident. This is one reason why bodycams should only be used as a tool to help analyze an incident. Cameras are definitely not an accurate depiction of the totality of an incident: small movements, micro-gestures, facial expressions, even voice inflections are not—and can not—be accurately picked up by a camera.

When I interviewed Kidder he told me several times: “I knew he wasn’t armed.” How could he be so sure? After all, his body language and paralinguistic communication told a different story.

Kidder made this determination based partly on “gut feelings,” the unconscious part of his brain that is experiential. But consciously he also noted that the pocket Wilcox had his hand in didn’t seem as though it contained an object.

Kidder, who had his weapon out and trained on Wilcox, “wanted to be sure” before he shot. And he wasn’t. In this case he was correct. The public perception issue never entered his mind.

Kidder also told me that falling down changed the scenario in his mind. At that point further advancement by Wilcox probably would have resulted in the officer firing his weapon.

No matter what we think about the way this incident was handled, Officer Kidder’s perception of the incident is all that truly matters. In a rapidly evolving, tense encounter, it’s nearly impossible for anybody to honestly say what they would have done. Kidder would have been totally justified if he used deadly force in this situation based on the totality of the circumstances, from what he was advised by dispatch to what he saw and felt during the encounter.

Conclusion
What can we learn from this encounter?

Real deadly force encounters are nothing like you see on TV. They are ever-evolving, high-speed events that involve everything from the suspect’s eyes, facial expressions, and gestures to his tone, voice inflection and language. Decisions have to be made in that reality, not the reality others think or hope exist, which is exactly what Officer Kidder did.

Foot Pursuits: The Last Installment of a 3-Part Series

Cops Respond: Is a TASER a Deadly Weapon in the Wrong Hands?

Is a TASER a Deadly Force Weapon When Utilized by a Resistive Subject?